A Day Learning about Early Aviation 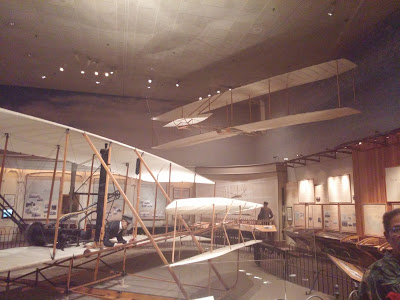 Yesterday, I went on a day long tour of early aviation artifacts and sites located in the Washington DC area organized by Smithsonian Associates (link to tour)

The tour was lead by Paul Glenshaw.  Paul was acknowledged for his help by David McCullough in his book :"The Wright Brothers", a book I read in preparation of this tour.

We first visited the National Air and Space Museum to view the early Wright gliders, and of course,the 1903 Wright Flyer.

We also saw Lilienthal's early glider, and the Langley Aerodrome.  #5.  This aircraft was flown successfully unmanned near my home, off of Chopawamsic Island (map) itself just off Quantico Marine Base.

The next visit was the Smithsonian Castle.  The garden there was the site of Professor Langley's construction of the Aerodrome.
'
Afterwards we visited Haines Point, site of the unsuccessful attempt to fly the powered Aerodrome by pilot Charles Manly.

Next was the Air Force Memorial.  And then Fort Meyer, where in 1908 Orville Wright demonstrated the Wright airplane for the U.S. Army.  On one test flight, the plane crashed, injuring Orville, and killing Lt. Thomas Selfridge, making Selfridge the first airplane fatality.

In 1909 Orville successfully demonstrated the airplane's usefulness to the US Army at Fort Meyer.  As part of the contract to sell a plane to the Army, the Wrights had to train two pilots.  That training was done at College Park.  After the Wright's left, training continued at the nascent College Park Airport, the oldest airport in the world.

The College Park Aviation Museum was our final visit.

I chose some photographs from the many I took, and captioned and shared them.

Note: click the first photo, and then Info button

to see captions and a map where the photo was taken.  Hover your mouse over the right edge of the photo for an arrow to the next photo. 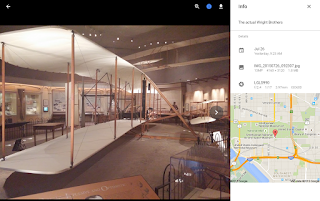 Google Assistant did the same programmatically.

This post was my way of documenting and remembering the day, but thought others might enjoy it too, if for no other reason then to know about the wonderful resource that is Smithsonian Associates.

Popular posts from this blog

Recording your own notes with Google Voice

I stopped using this when Google Now became useful on my phone, and I could dictate reminders using it.


I found a way a while ago to use Google Voice to record a personal note, transcribe it, and email it to me. A recent Lifehacker post "Five Things We'd Like to See in Google Voice" lists that need as their #5 request, so I realized what I'd figured out is not common knowledge.

To avoid listening to my standard voice mail when I call, I recorded a short voice mail greeting for this group simply saying "Record note now"

I added a contact with my own cell phone number as the only number, and made it the sole member of this group.

In GV's phone settings, I edited the settings for my cell phone. In the section "Direct access to voicemail when calling your Google number from this phone?" I se…
63 comments
Read more

October 31, 2015
I have always found using IFTTT to send things into Evernote useful.  I currently have all Starred Gmail's, Saved Reddit posts, Archived posts in Pocket, and more all flow into Evernote, thanks to IFTTT.com

When my wife showed me Trello, I found Evernote and IFTTT didn't work together quite as well as I hoped.

If you haven't checked out Trello,it is a more visual version kind of Evernote.  It is great for doing some kinds of project management.  I do not actually use it, but I could see myself using it for a future project.


One drawback when I looked at Trello was it didn't have a Web Clipper.  You couldn't just save a web page to Trello.

I had the bright idea of capturing the web page to Evernote, and then have IFTTT to move the post from Evernote to Trello.

Alas, I had never looked at the Triggers IFTTT supported for Evernote.  It didn't have one to take a new note and copy it to another service.

Your First Day with Evernote

October 10, 2009
I've written many times before about Evernote.  I love this program.  It is my brain's memory on steroids.  I have over 6000 notes in it now.  And I keep finding ever more uses for it.

While originally written in 2009, this post has been frequently updated.

Sunday October 11, 2009 I wrote about Evernote in my print column, Family Tech. If you are wondering what is Evernote, and why would I want to use it, start with the column.

I promised in that column this post to help new users get efficient fast with Evernote.

I thought I'd write a quick plan for someone's first day with Evernote. This is really meant for after you've installed the client to your computer, so this picks up after you've gone to  Evernote's Get Started Page and created an account and downloaded and installed a client for your primary computer.